If you are looking for something superfast to take to the racing track then your best options would be to try out an Aprilia or Ducati. Both bikes are optimized for speed and come with some aggressive looks that will keep heads turning.

Any race between the Aprilia and Ducati is surely going to raise the curiosity of many super bike fans. Here you have monstrous engines capable of generating lots of horsepower at the slight press of the throttle. 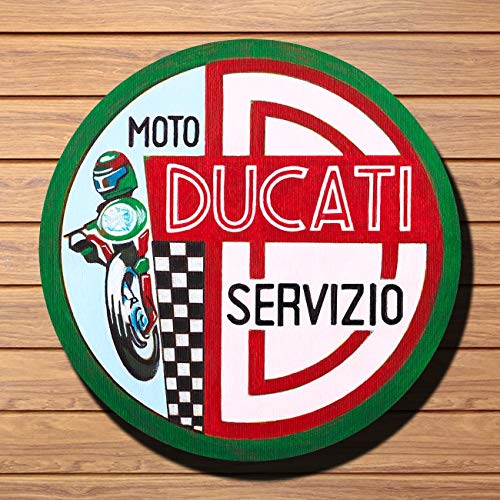 In fact, a close race between the super-fast Ducati V4 S and the Aprilia RSV4 can only be measured in milliseconds as the bikes offer a strong punch when it comes to fast acceleration.

Ducati and Aprilia have over the years established themselves in the superbike category. Their bikes come with accentuated curves that give the bike that aggressive and menacing look.

Choosing between the two is a very close call. This review of Aprilia vs. Ducati closely examines the key factors that make this bike makers outstanding in the superbike category.

What are the differences between Aprilia vs. Ducati?

Aprilia vs Ducati – How do they differ?

When Aprilia started manufacturing engines it started with a 50cc motorcycle. Then this was upgraded to 125cc and 250cc bikes that have won motor championships across the world.

Aprilia has been able to outsource some of its engines from Rotax hence its 125 STX and 350STX line of bikes. To satisfy the off-road market Aprilia has the Pegaso 600 and a couple of 250cc Grad prix racing beasts.

Ducati has stood out for a long time courtesy of its revolutionary V-twin engine. This design has enabled the bike maker to design some single, double and four cylinder engines. The engines are air-cooled.

The Ducati main sport bike the Panigale V4 has a shortened frame when compared with the Aprilia main super bike the RSV4. The bodywork has been modified so that you have better airflow.

The Aprilia and Ducati share the same carbon fiber body but you will find the Aprilia one having more bodywork paintings and gravity. The electronics on the Ducati V4 are quite similar to what you have in the V4S and you get a large 5-inch TFT screen with riding modes like sport, race, and street.

You will also find stuff like wheelie control, traction control and lap timer. When you take a closer look at the Aprilia RSV4 1100 you will notice that it has some dark graphics on carbon fiber frame. The electronics are directed through a TFT instrument console with riding modes and full multimedia screen that allows to accept and reject calls.

If you were to compare the Ducati superbike the Panigale V4 R with the Aprilia RSV4 1100 you will notice some similarities in engine size. But there is a slight difference, the Aprilia comes with a displacement of 1078cc while the Ducati has 998cc.

However, the Ducati produces more power inspite of the smaller displacement at 221 PS compared to 217 PS for the Aprilia. This can properly be attributed to the Ducati superior air intake system.

Aprilia vs Ducati – a Comparison Overview

Piaggio own this Italian motorcycle company. The company manufacturers a considerable amount of scooters, bicycles and lately super bikes like the Aprilia V4 RSV4 and the V-twin RSV mille.

The company was founded in 1945 in Naole, Italy. Despite the bike manufacturing a variety of bike models it is in the racing track that the biking machine has seen huge success. Here it has won the Grand Prix in the 500cc and 250cc category. The bike maker also participates in the MotoGP and FIM superbike world championship.

This is Aprilia flagship super bike and one responsible for most of their wins and fans across the globe. The bike is full of the latest electronics and offers great handling both on and off track.

Production of the bike started in 2008 at that time was capable of 200 HP at 150kW. The bike was soon to be introduced to the 2009 Superbike World Championship. One of the most popular racing rider to use the RSV4 is Max Biaggi.

Maximum torque is set at 115.2 Nm. All this power is delivered courtesy of a six speed manual gearbox. The Aprilia RSV4 is superlight at 170 kg and this contributes immensely to its agility and excellent handling.

When it comes to the bike electronics nothing has been spared. You get engine mapping settings, Aprilia Performance control ride system, traction control, quick shifter, wheelie control and an innovative Aprilia electronic engine management system.

The suspension on this bike are top notch. You get Ohlins fork with adjustable spring preload, rebound damping, and hydraulic compression. For braking at the front you get floating stainless steel 320mm discs accompanied with Brembo monobloc M430 radial calipers.

At the rear you get Brembo calipers and 220mm diameter discs. All this are meant to help you get the Aprilia RSV4 to a complete halt under high speeds.

You have two versions of the Tuono – V4 1100 RR and V4 factory. The bikes sport V-4 engines that are supported by twin-spar aluminum frames. The suspension is through STX 46 shock and Ohlins NIX forks.

You also get front 330mm brake discs. The main aim of creating the Tuono V4 1100RR is to have a superfast bike that you can use on the racing track without necessarily cruising with it on the roads.

To give the bike an aggressive look that is loved by racers it comes with receding headlights and below RAM air intake ports. When it comes to power you get the same 1,077cc V4 65-degree engine as in the regular models. This helps the bike get a horsepower of 173 at a torque of 89 lb.ft.

The electronics on the bike at on point as you get Aprilia performance ride control. The Aprilia Misano while similar to the RR comes with a number of carbon fiber modifications. You also get a lightweight lithium ion battery that helps keep the bikes weight down. When the Misano was produced it was only limited to just 100 units.

Ducati is an Italian company with headquarters in Bologna, Italy and owned by the Volkswagen group. The motorcycle maker is responsible for the production of various bike categories but it is the super bike category that it is well known.

Its high performance bikes come with 90 degree V-twin four stroke engines that are capable of delivering high horsepower at the push of the throttle. The company has also invented the innovative desmodromic design whereby one of the bikes cylinders is vertical while the other horizontal.

The Panigale gets its name from where the bike manufacturing process takes place. This bike is menacing and superfast. The wide and well accentuated curves helps the bike glide at superfast speeds without minimal drag.

The Panigale V4S is comes with a 1,103cc engine that is capable of generating 208HP @rpm of 13,000. The large engine may confuse some to think that it is heavy but it weighs a modest 198kg.

When the company was starting production for the V4 they knew that more cylinders was the way to go so the bike derives its awesome power from the four cylinder engine. This enables the bike to hit a torque of 124Nm.

As for electronics you get the very best that Ducati has to offer. All these is delivered through an intuitive 5-inch TFT color screen. Suspension for the bike is courtesy of Ohlins and you get a lithium ion battery with aluminum wheels that make the bike lighter.

The electronics for the V4 were derived from the 1299 Superleggera and include wheelie control system, drift control and traction control. The ABS for the Panigale V4 are specifically made for high speed cornering. You also get Brembo calipers that are designed to be 70g lighter than those put in the Panigale 1299.

The 1299 is a superfast bike that was unveiled by Ducati during the Milan Motorcycle show in 2014. It succeeded the 1,198 cc Panigale. The bike still retains some similar features to its predecessor and you will get Shachs shocks and front Marzocchi forks.

The wheelbase is the same at 1,437mm but the bike has seen an improvement in its electronics suite know coming with anti-wheelie, New IMU and racing ABS. The Ducati Panigale 1299 S has a displacement of 1285cc and features a L-twin four stroke 90 degree desmodromic DOHC engine.

It has 4 valve per cylinder and this makes it very efficient in accelerations.

The chassis for the bike has been updated and this makes the bike very agile at high speeds. Due to the large displacement the 1299 is capable of generating a maximum torque of 144.6 Nm.

To give the bike a truly racing style the bike comes with horizontal twin headlamps and front intake ports. The lights are quite menacing anytime you take the bike for a ride at night.

The electronic kit is quite impressive as you now get the Ducati wheelie control, Cornering ABS and Engine brake control. To help improve your track performance the 1299 now comes with Ducati quick shift system that allows down changing.

This allows the bike to reach a torque of 142Nm. All this power is delivered through a six speed manual gearbox. What makes the Ducati 1299 Panigale last edition special is that it is the last bike in its class to feature the V-twin engine before Ducati upgraded to the V4 engine.

Some of the upgrades to the last edition include a superquadroengine 1299cc L-twin engine that is capable of delivering over 206HP and 142 NM of torque. The crankshaft has been made lighter and you also get a larger crank pin.

The intake-exhaust valves have been upgraded to titanium. But, you get some of the same Ohlins suspension and chassis that you had in the 1199 Panigale.

Since the bike is a limited edition bike you may not find it in your local dealership but there several second hand models been sold around. Overall, the Panigale series produces some awesome super bikes that are capable of giving competition a run for their money.

The bikes are agile, comfortable and with engines capable of reaching unimaginable speeds. The only downside would be the high price for some of the Panigale models.

Ducati has had a successful run when it comes to world motoring championship. Their flagship brand the Panigale V4 comes very close in a racing competition with the Aprilia. However, if you are looking for a variety of biking categories like cruisers, off-roaders then Ducati offers a larger product range than the Aprilia